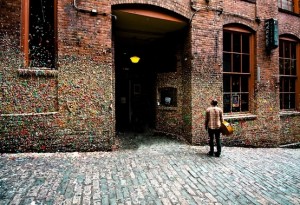 The Alibi Room is nestled inside the the world famous Pike Place Market, although it is tucked away from the main tourists attractions.  The Alibi Room is immersed and surrounded by history, like the street (Post Alley) was made with cobblestones from the 1906 San Francisco earthquake, brought here on lumber ships that were using the stones and rubble for ballast. Post Alley was also home to a Post Office  and the first offices of the Seattle Post-Intelligencer Newspaper.  The Alibi has long been a favorite bar for Northwest authors, writers and artists alike. Its dark speakeasy style with exposed brick and beams gives it a special allure.

The famous Gum Wall is right across post alley from The Alibi Room. It is considered to be one of the largest, strangest and most unsanitary public art projects in the world. The gum wall was started 20+ years ago when a group of theater goers collectively stuck pennies on the wall using the gum as an adhesive. The maintenance staff eventually quit trying to remove it and it has been steadily growing ever since.